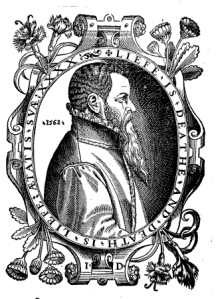 During the time of the Renaissance there was a debate between humanist moral theologians and those who followed the via antiqua. The former thought moral theology could not be properly utilized by the laity and should therefore be confined to the universities. The latter considered the practical science apt for the virtuous rhetor to use in discourse and civic instruction on the nature of human behavior. Thus, one can see a disagreement between those who considered the science more speculative and those who considered it more practical. The University of Padua adopted the Florentinian humanistic concept of the science of morals but later confined the discipline to the clerics.

According to David Lines, many books were used during the Renaissance as sources for the study of morals, including Thomas Aquinas’s Sententia libri Ethicorum (i.e., his commentary on Aristotle’s Nicomachean Ethics).

In fourteenth century Italy, most interpreters of the Ethics [Aristotle’s] drew heavily on Thomas’s own commentary. Acciaiuoli’s commentary was admired partly for its faithfulness to the Dominican friar. Even Ottaviano Ferrari (1518-86), a pugnacious scholar who lectured on the Ethics in the Collegio Canobiano of Milan, could oppose but not ignore the saint from Aquino. The effects were even clearer on the members of the Dominican and Jesuit orders. Around 1490 two near contemporary Dominicans, Ludovico Valenza da Ferrara and Girolamo Savonarola, produced compendia of moral philosophy. Tellingly, these works are not digests of Aristotle’s works, but of Thomas’s Summa IIa IIae, even though they cover topics in ethics, oeconomics, and politics. (Lines, “Humanistic and Scholastic Ethics,” Cambridge Companion to Renaissance Philosophy [CCRP], 310.)

The Paduan trained Peter Martyr Vermigli carried on the tradition of lecturing on moral theology that saw the value of the science for the civic sphere, as he lectured at the Academy of Strasbourg. Vermigli was trained in the via Thomae and most likely knew the humanist poet Flaminio of Serraville, but the extent of his humanism lies in a literary technique and linguistic capacity that was typical of the ad fontes approach of the age.  An example of this can be seen in his translation of Aristotle’s Nicomachean Ethics from Erasmus’s 1531 Greek edition, rather than relying on a Latin text. Particularly, Vermigli follows a humanist interpretation of one of Aristotle’s key phrases.

He comments on Aristotle’s statement τἀγαθόν οὗ πάντ᾽ ἐφίεται (the good is that at which all things aim), saying even though τἀγαθόν is definitive (as opposed to ἀγαθόν) it does not refer to something supreme, as the “summum bonum” (supreme good) or “God” and especially not “The Holy Trinity.” He notes that the Greek article does not always denote something particular:  “Another function of the article is to indicate the reason and form without any particular conditions, in which several individuals are united; for example, as when we say ho anthropos logikos, ‘man is rational,’ we do not mean a specific individual, but rather we define the common nature and form that are shared by various individuals like Socrates and Plato.” (Commentary on Aristotle’s Nicomachean Ethics, 21.) Contrary to those who see the phrase as a reference to the Trinity, Vermigli believes that τἀγαθόν refers to the “good itself” or the common good, which is the common form of the many naturally desired goods. A horse seeks after its own good, a dog its own good, and a human aims at its own good, but all things seek the good in general. If all things aimed at God or the supreme good there would be no natural end or reason for which each species was created, as if nature does not aim at its own preservation and perfection.  Vermigli recounts the interpretation of Leonardo Aretino (a.k.a Bruni; d. 1444) and George of Trabizond (d. 1486), who were led by the Greek article preceding the noun to interpret the phrase as a reference to the Trinity.  Instead, Vermigli follows the exegesis of Johannes Cardinal Bessarion (d. 1472).  “Bessarion, Nicene cardinal and the most learned man among the Greeks of the modern era, refuted this opinion, saying that Trapezuntius [Trabizond] should have been aware that in Greek when an article precedes a word it has a triple function.” (ibid, 22, 23)  Vermigli then adopts as his own the translation of the humanist Johannes Argyropoulos (d. 1487) who rendered τἀγαθόν as “the good itself.” (ibid)

The translation of τἀγαθόν posed a problem for other theologians during the time of the Renaissance.  David Lines affirms that one issue of debate in this period was the notion of the goal of all things:

which Aristotle described at the beginning of the Ethics as tagathón (“the good”).  Bruni’s [Leonardo Aretino] translation of this expression as summum bonum … was often followed well into the sixteenth century.  But it also raised questions and objections.  After all, if moral philosophy really deals with the supreme good, how does it differ from metaphysics and theology? And to what extent could one really expect a pagan such as Aristotle to be cognizant of Christian truth?

Vermigli seems to tie his interpretation of τἀγαθόν as the “good itself,” as opposed to summum bonum, to his belief that the pagan philosopher does not know the good as God per se in his search for the good as his final end. In other words, his translation is not abstracted from a real doctrinal issue. He notes:  “The difference between us and pagan philosophers is that they suggest the ultimate end should be achieved by one’s own virtue and zeal, whereas we say on the basis of divine scripture that the supreme good [summum bonum] cannot be obtained unless we are assisted by the spirit and grace of Christ.”  (ibid, 41.) In this passage Vermigli appears to limit the translation summum bonum to that particular end which may only be realized through the assistance of Christ. Thus, Vermigli distinguishes summum bonum from “the good itself” in order to clearly differentiate between the final end as understood by the pagan philosophers and the final end as it is revealed in the scriptures, an idea that he sees exemplified by the rules of Greek grammar.

Thomas Aquinas’s exegesis of Aristotle’s τἀγαθόν is similar; although, he was unfamiliar with the Greek text and depended upon a Latin translation that rendered the term summum bonum. Instead of the humanist ethos that provoked study of the original languages Thomas did not have a functioning knowledge of Greek and relied on William of Moerbeke’s Latin translation of Aristotle’s Ethics. Like Vermigli, Thomas also makes a distinction between the different desires of particular beings, and, although beasts lack the type of desire that comes with knowledge, they also tend toward the good via the guiding knowledge of the “divine intellect.”  (Commentary on Aristotle’s Nicomachean Ethics, I.1.11) Aristotle’s summum bonum does not imply a single good that all things desire but refers to the good in general.  However, Thomas’s interpretation falls into the realm of Vermigli’s critique in his statement, “because nothing is good except insofar as it is a likeness and participation of the highest good [summum bonum], the highest good itself is in some way desired in every particular good.” (ibid) However, this evidence does not demonstrate a substantial theological difference between Thomas and Vermigli, because Thomas’s method of commenting on Aristotle primarily consists of finding the truth for the instruction of the theologian and only secondarily consists of determining authorial intent. In fact, “Thomas places himself explicitly in the Christian perspective and arranges things so as to have the Philosopher speak of the contemplative faculty in which Thomas himself sees the happiness of beatitude.”  (Jean-Pierre Torrell, St. Thomas Aquinas, Vol. 1, 228) Also, Thomas’s assertion that the summum bonum is desired in every particular good “in some way” is ambiguous and does not appear to differ per se from Vermigli’s statement that the pagan philosopher seeks God per accidens, not per se, in seeking the common good.

In conclusion, one can see the benefits of a new age and development of scholarship that was the Renaissance. Vermigli remained a follower of the via antiqua, but his acceptance of certain humanistic principles and alacrity to follow the interpretation of humanist philosophers rendered him more capable to determine the proper relationship between philosophy and theology.

One thought on “The Meaning of Aristotle’s τἀγαθόν: The Benefit of a Humanist Ethos”