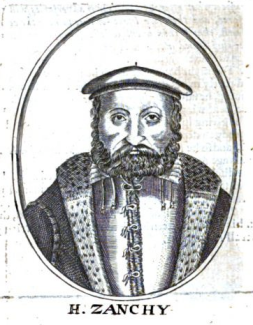 The following is a brief biography of Jerome Zanchi by Samuel Clarke, a late 17th century English Presbyterian. The accuracy of the data should be taken with caution due to the nature of the writing and the polemical agenda of the writer. However, the facts seem to be correct and do not present anything that appears blatantly dubious. If I were to write this bio I would make greater mention of Zanchi’s humanism, particularly his lectures on Aristotle’s Physics that he delivered in Strasbourg while Peter Martyr was lecturing on the Nicomachean Ethics in the same school. I’d also include the fact that Zanchi, like Martyr, was a trained Thomist and even planned to organize his works into a Summa theologiae. Yet, the following is a good intro to the life and times of such a monumental Reformed divine who has been unjustly neglected in our day.

Hierom Zanchius was born at Atzanum in Italy, Anno 1516. His Father was a Lawyer, who brought him up at School; and when Zanchy was but twelve years old his Father died of the Plague Anno Christi 1528; at which time Zanchy was at School, where he was instructed in the Liberall Sciences: When he came to the age of fifteen years, being now deprived of both his parents, observing that divers of his kindred were of the order of Canons Regular, amongst whom that there were divers learned men, being exceeding desirous of Learning, he entered into that Order, where he lived about twenty ears, and studied Arts and School-Divinity, together with the Tongues. He was very familiar with Celsus Martiningus, joyning studies with him, was a diligent hearer of Peter Martyr’s publick Lectures at Luca upon the Epistle to the Romans, and of his private Lectures upon the Psalmes, which he read to his Canons. This drew his mind to an earnest study of the Scriptures. He read also the Fathers, especially St. Augustine, with the most learned Interpreters of the Word of God: And thereupon he preached the Gospel for some years in the purest manner that the time and place would suffer. And when Peter Martyr left Italy, so that his godly Disciples could no longer live in safety there, much lesse have liberty of Preaching, about twenty of them in the space of one year left their station, and followed their Master into Germany, amongst whom Zanchy was one. Being thus (as he used to say) delivered out of the Babylonish captivity, anno Christi 1550. He went, first into Rhetia, where he staied about eight months, and from thence to Geneva, and after nine months stay there, he was sent for by Peter Martyr into England, but when he came to Strasborough, he staid there to supply Hedio’s room newly dead, who read Divinity in the Schooles, which was in the year 1553. (The Marrow of Ecclesiastical History, 804-807)

Professor of Divinity in Strasbourg:

He lived, and taught Divinity in that City about 11 years; sometimes also reading Aristotle in the Schools; yet not without opposition, old James Sturmius, the Father of that University being dead: Yea his adversaries proceeded so far as to tell Zanchy, that if he would continue to read there, he must subscribe the Augustane Confession, to which he yeelded for peace-sake, with this proviso, modo Orthodoxe intelligatur; declaring his judgment also about Christ’s presence in the Sacrament, wherwith they were satisfied. And thus he continued to the year 1563, being very acceptable to the good, and a shunner of strife, and a lover of concord. At the end whereof the Divines and Professors there, accused him for differing from them in some points about the Lord’s Supper, the Ubiquity of Christ’s Body, the use of Images in the Churches, Predestination, and the Perseverance of the Saints: About these things they raised contentions, which were partly occasioned by the book of Heshusius, printed at this time at Strasborough, About the Lord’s Supper; and it came to this pase, that they put Zanchy to his choice either to depart of himself, or else they would remove him from his place. And though many waies were tried for the composing of this difference, yet could it not be effected. (ibid.)

Pastor of an Italian Congregation:

But it pleased God that about this time there came a Messenger to signifie to him that the Pastor of the churhch of Clavenna, in the borders of Italy, being dead, he was chosen Pastor in his room; wherefore obtaining a dismission from the Senate of Strasborough, he went thither, and after he had preached about two months, the Pestilence brake forth in that Town so violently, that in seven months space there dyed twelve hundred men; yet he continued there so long as he had any Auditors; but when most of the Citizens had removed their families into a high mountain not farre off, he went thither also, and spent above three months in Preaching, Meditation, and Prayer, and when the plague was stayed, hee returned into the City again. And thus he continued in that plae almost four years to the great profit of many, but not without afflictions to himself. (ibid.)

Professor of Divinity in Heidelberg and Christian Apologist:

Anno Christi 1568 hee was sent for by Frederick the third, Elector Palitino, to Heidelberg to be Professor, and was entertained with all love and respect, where he succeeded Urfin, and at his entrance made an excellent Oracion about the preserving, and adhering to the inner world of God alone. The same year he was made Doctor of Divinity. About which tie that excellent Prince Frederick, who was a zealous promoter of the Doctrine of the Prophets and Apostles, required him to explain the Doctrine of the one God, and three Persons, to confirm it, and to confute the Doctrine of those which at the time denyed the Deity of Christ and the Holy Ghost in Poland and Transilvania, and to answer their arguments whence upon he wrote those learned Tractates, De Dei natura, De tribus Elohim, etc. In which book the whole Orthodox about that great Mystery so unfolded and confirmed, that all adversaries may forever be ashamed which goe about to contradict the same…. (ibid.)

Move to Neostade and Death:

He taught in that University ten years till the death of Prince Frederick. Then by Prince John Cassimire he was removed to his new University at Neostade, where he spent above seven years in reading Divinity. Though in the year 1578 he had been earnestly solicited to come to the University of Leiden, then newly begunne; as also the year after the Citizens of Antwerp called him to be their Pastor, yet the Prince would by no means part with him, knowing that he could not be missed in his University. The Prince Elector Palatine, Ledwick, being dead, and Prince Cassimire being for the time made Administrator of his estate, the University was returned from Neostade to Heidelberg, and Zanchy being now grown old, had a liberal stipend setled upon him by Prince Cassimire; whereupon going to Heidelberg to visit his friends, he fell sick, and quietly departed in the Lord Anno Christi 1590, and of his age seventie five. He was excellently versed in the writings of the ancient Fathers and Philosophers, he was of singular modesty, and very studious to promote the peace of the Church. (ibid.)