When Martin Luther began translating the Hebrew and Greek texts of the Bible into German in the 1520s his main intention was to create a text in a common dialect that would open up the word of God to the laity. Yet, something in Luther’s modus intelligendi prevented him from releasing the final copy devoid of any illuminating artwork. This will inevitably seem odd to the average Protestant of our day who (a) does not live in a culture that values illuminated manuscripts and (b) fears any sort of “superstition” that may accompany images placed so dangerously close to God’s inerrant word. Luther did not think that way, and neither did the other Reformers (as I have demonstrated concerning Zwingli).

In fact, Luther appears to have no reservations about the inclusion of images of God within his Bible, as the following images taken from his “Bibel … Schrifft Deutsch” show.

1. This image is similar to that in Zwingli’s “Zürcher Bibel” and depicts the “Son of Man” from John’s Apocalypse:

2. Here God is depicted in the text for Genesis 1, creating and upholding the earth. 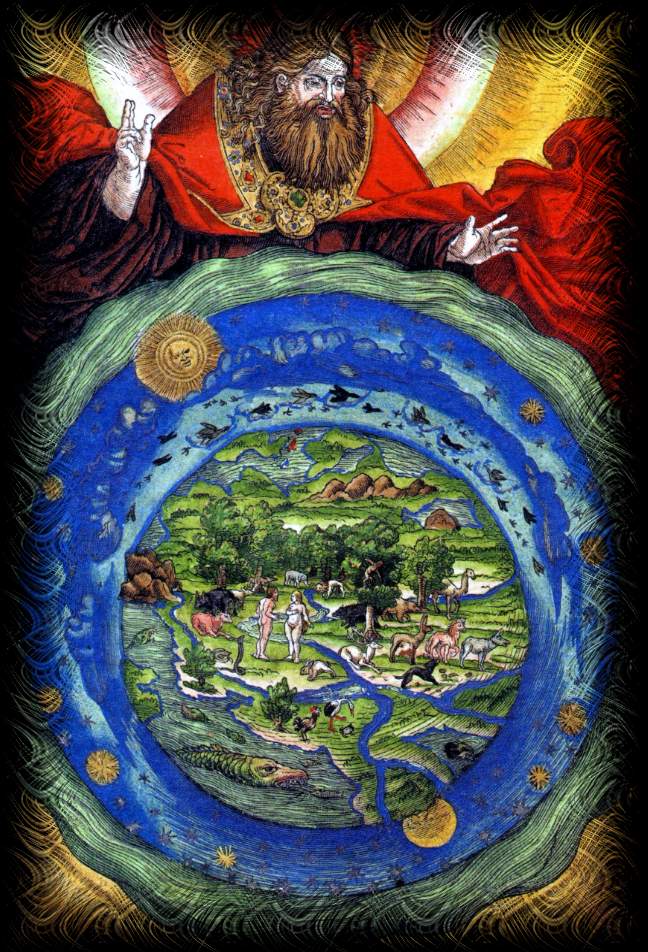 3. Finally, this image is a depiction of Ezekiel’s vision of God on his throne from Ezekiel 1. 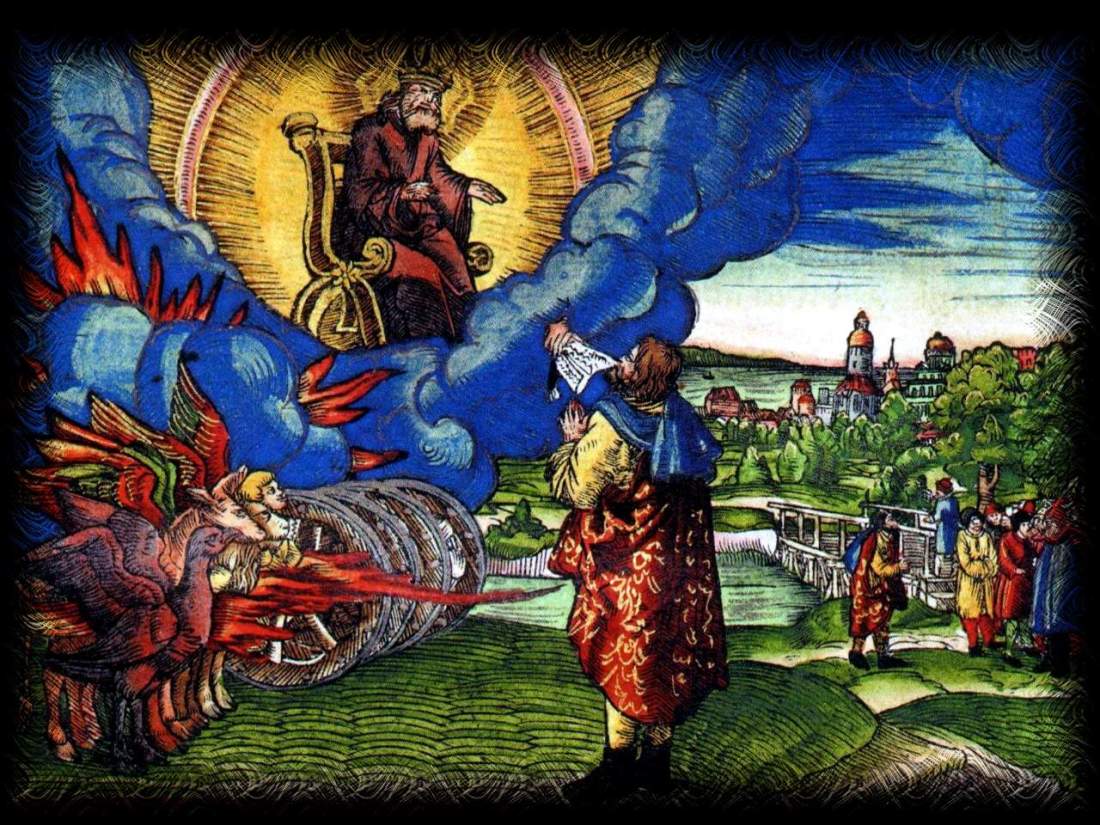 Of course Luther cannot be accused of limiting God’s nature to that of a man, rather he views the appearances of the “Glory of God” in the Old Testament as an appearance of God’s likeness or the pre-incarnate Christ himself. Luther was not afraid that those who see these images would come to think of God as a mere man. On the contrary, Luther considered these images to be detrimental to the goal of a biblically educated church. Ezekiel really saw the likeness of God. The people should be encouraged to believe that.

Luther was no artist in the professional sense. Therefore, he needed help in creating Reformed images for his new translation. The artist chosen to help would need to be Reformed and comfortable with Luther’s theology, such as the exclusion of halos around the heads of saints and the belief that the images may carry some sort of inherent blessing. He did not need to look far. There was already a local artist by the name of Lucas Cranach the Elder who was a court painter for the Electors of Saxony. Cranach met Luther sometime around 1520 and developed a strong bond with him that would last for the remainder of his life. The two even became godparents to each other’s children. Cranach and Luther worked closely together on numerous propaganda pieces against the extravagancies of the Papacy at that time. One of their first projects together was that of Luther’s Bible.

Some may find it difficult to think of Cranach’s religious depictions as genuinely “Reformed” because the interpretation of images is often somewhat subjective. However, this is not the case with Cranach, as Bonnie Noble points out:

From the very beginning of Luther reform, Cranach made pictures to promote religious change. A famous and early Cranach-Luther collaboration is the Passional Christi et Antichristi, an acerbic, propagandistic, illustrated book of 1521 that contrasts Christ with the pope in the role of the anti-Christ. According to a statement by an employee in the Wittneberg shop of Hans Lufft, who printed the book, Luther supplied the text for the project: ‘The honorable doctor recommended some of the figures himself, how one should sketch or paint them, how one was supposed to paint according to the text and did not want any extra, unnecessary things that did not serve the text. This quotation is intriguing for at least two reasons. First, it highlights the priority of aligning pictorial and textual meaning, of creating a limited, reciprocal relationship between word and image, to the exclusion of ‘unnecessary things that did not serve the text.’ Second, it indicates that Luther at least advised on the production of the image, exercising influence on its content. The contrast between Christ and the pope makes the Lutheran agenda unmistakable. (Lucas Cranach the Elder: Art and Devotion of the German Reformation, p. 34.)

Therefore, Cranach and Luther worked together to produce pieces that would not only aid in the interpretation of the Bible but also in winning converts to the Reformation cause. Perhaps the most famous Luther-Cranach piece is Gesetz und Gnade (Law and Grace, a.k.a., Law and Gospel).

This image depicts one of the most pivotal elements of Luther’s theology. On the left is the Law and judgment symbolized by a man being forced into hell by Death and Satan, Moses delivering the Ten Commandments, Christ sitting in judgment, and Adam and Even partaking of the forbidden fruit. On the right is Grace and the Gospel with Christ’s cross crushing Death and Satan and the blood of Christ covering those near the cross. The tree that divides the painting is dead on the side of the Law but vibrant on the side of the Gospel. Luther and Cranach are not here depicting a radical break between Law and Gospel, the theologies of the Old Testament versus that of the New. Rather, as Noble demonstrates, “The painting draws a boundary between the dynamics of Law and Gospel (Lutheran theology) on the one hand, and law on its own (Catholicism or Judaism) on the other.” (ibid., p. 49.) Luther is not antithetical toward the Law as a guide in Sanctification, rather he castigates the Law seen as an agent of Justification.

This emphasis on theology has led many scholars to the notion that Luther and Cranach’s religious depictions are merely functional. The idea is that these images are only meant to convince the mind of a particular theological position or way of interpreting the Bible and nothing more. Yet, the detail in these works conveys a different message. Surely functionality is important. Luther considered the errors of the Roman church to be the works of Satan himself. In that light, these pictures were meant to guide the pious back toward God’s grace which is freely exhibited by the cross of Christ. However, one should not say that Cranach’s artistic hand was somehow limited by the particular medium with which he worked, or that artistic value was for him subordinate to his theological agenda. These works were meant to unveil the “veiled God” of whom Luther so often spoke. These images were designed to convey the truth, to shine light upon a dark world. And for that reason creativity cannot be a mere by-product of function.

We can catch a glimpse into the world of the 16th century Reformation through Luther’s relationship with an artist who used his medium to do spiritual battle against the dark forces within the church. It was not Luther’s intention to merely teach the less-educated by including awesome images within his Bible. He called on Lucas Cranach the Elder to use his God-given talents to open the word of God to the eyes and the imagination as Luther himself was opening the word of God for the first time (in such an accessible form) to the German people.